Tell us about your project!

This paid piece is sponsored by Journey Group.

It’s rare to visit the Cathedral of St. Joseph and leave unaffected by its blend of splendor and spirituality.

And for those who spent two years restoring the Sioux Falls landmark, the effect still lingers one decade later.

“It was more of a privilege working on that project than anything,” said Tony Wiseman, who served as the project manager on the restoration for Journey Group.

“I’m pretty sure I got more out of it than I could give.”

Serving as construction manager at risk, Journey led a global team of architects, artists, tradesmen and craftsmen to restore the Cathedral back to its original greatness.

“The team we had wasn’t there to just build another project,” said Jesse Davey, who served as superintendent for Journey.

“The team was there for a reason. They were because of their unique skills and because they enjoyed a project as challenging as this one. Not all projects require that, but this definitely did.”

The Cathedral of St. Joseph marks its centennial anniversary this year, providing a chance for the community to learn more about its history and the milestone renovation that helped prepare it for the next 100 years.

“Bishop Swain’s directive was that we were going to restore, preserve and beautify this sacred edifice which we inherit,” said Matt Althoff, chancellor of the Diocese of Sioux Falls.

“Despite two major renovations in 80 years, we were going to restore it back to the architect’s original intent.”

The Cathedral began as the dream of Bishop Thomas O’Gorman, who became the bishop for South Dakota in 1896.

Construction began during World War I, which presented multiple challenges, including a shortage of skilled workers and high material costs. The final price tag, $390,000, was more than $100,000 over the original budget and meant some of the intended finishes had to be deferred or not installed.

More than 80 years later, as the Sioux Falls team prepared to restore the building, it sought out Masqueray’s original blueprints. They eventually were located in archives at the University of Minnesota and were given to architect Duncan Stroik, a professor and practicing architect at the University of Notre Dame who specializes in sacred and classical architecture.

“So that we could know the mind of the architect, the original blueprints were essential,” Althoff said, adding they informed about everything from the heating and cooling systems and lighting to what the building structurally could support.

“Duncan brought a host of expertise, and beautiful partnerships between specialty contractors and the CM ensued. They were phenomenally collaborative and, collectively, made a great team.”

Journey began work on the $16 million project in May 2009 and completed it a little more than two years later, on time and on budget.

“There were tons of moving parts, many time zones and lots of geography involved, and they (Journey) coordinated everything, from the schedule to making sure the conditions were safe on-site,” Althoff said.

When the project started, the Cathedral was a space that largely had been covered in beige paint sometime in the 1970s.

Condensation resulting from no air conditioning in the building was causing deterioration in the plaster walls.

But the peeling paint was just one sign that improvements were needed. Here’s a look at the building before the project started.

“The team’s objective was restoring the project back to its original design. ”Wiseman said. “The focus was on attention to detail. All interior finishes and mechanical systems were addressed.”

“The diocese insisted on doing mock-ups of everything and examining everything, from paint colors to figurines, before final installation or application,” Althoff said. “There’s, of course, a scriptural context and a lot of sacred tradition that had to be represented accurately. You can’t paint a cloak brown when that saint is historically depicted in green. And we were doing a lot of our own research, making sure that art was consistent with how the church teaches.”

“Every project has painting, but these weren’t typical painters,” Davey said. “They were true artists. All the plaster reliefs and all the delicate ornate work was custom made. We could have used technologies, processes and materials that would have made it look like it was original, but they wanted everything built authentically the way it would have originally been done. The result was true authentic restoration.”

The bishop and others from the church even traveled to Italy to select marble that would be used in the Cathedral.

“To see an owner go there multiple times and see photos of them in Italy standing next to a chunk of marble that’s going to come on-site was fun to see,” Davey said. “To have an owner involved on that level was pretty unique.”

Once the artists and other contractors arrived on-site, accessing the high ceilings of the Cathedral presented another challenge.

Floor-to-ceiling scaffolding was used, as the 100-year-old floor couldn’t withstand the weight of some larger construction equipment.

“There were a lot of precautions taken, and we erected with means and methods that were very traditional,” Wiseman said. “Because we didn’t have the availability of cranes, we used scaffolds and hoists and things used since the original construction of the Cathedral.”

As when the Cathedral originally was built, economic challenges arose.

“Journey pre-qualified every firm that worked on the project,” Althoff said. “As the nation was going through a financial crisis (in 2009), they withdrew contracts from multiple vendors who were found to be under financial duress because they had the wisdom and the strength to know we couldn’t trust we would get the product delivered in the way this project and its schedule demanded it. They had to do it twice with some of the specialized carved wood involved in the project, so the level of vigilance on the part of Journey was quite remarkable.”

Similar challenges ensued with a centerpiece of the project: a new baldacchino, a stationary canopy installed above the altar.

“It took 18 months to source the columns on the baldacchino,” Wiseman said.

“This was the last major edifice in the worship space to get done before we opened the door, and it was crunch time. The contracted arrangement for installing the piece was unraveling due to factors beyond this project. We had an opening date on the calendar. And Journey worked hard, collaborating to create a different solution to get it built the way the architect envisioned. We’re so grateful for those back stories. They never get brought up on the tour. Visitors just expect the baldacchino to be there. But we encountered what could have been major hiccups, and yet there was no aberration of schedule.”

Here’s a look back on the two years of work that created the restored Cathedral:

From the outside, the Cathedral has stood as a beacon of hope, towering above north Sioux Falls for a century.

But post-restoration, the feeling inside its walls has gotten only stronger.

“It does exactly what the bishop wanted it to: It lifts people’s spirits,” Althoff said. “It is an amazing teaching tool. It is an evangelization tool. It is a beacon of hope that summons us and draws us, and at the end of the day, people just feel better for having set foot in there.”

Here’s a sense of what visitors encounter in the finished, restored space. 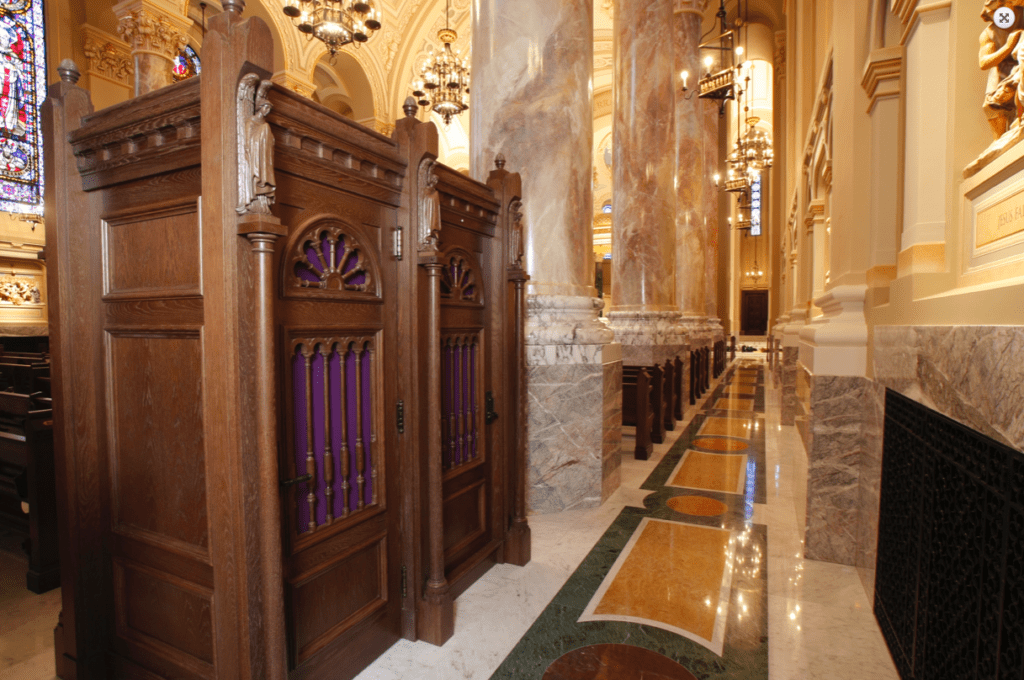 “I can’t imagine having the opportunity to do something like this again in my career,” said Davey, who is now a project manager at Journey and returns at Christmas as part of the company’s support for the Christmas at the Cathedral concert.

“Christmas is a time when I’m reminded of this project specifically, and I really enjoy bringing family and friends to visit the Cathedral whenever I can.”

He continues to keep in touch with the diocese team that worked on the project, he said.

“The relationships formed with Sioux Falls Diocese were more than just for business. They were personal for me, and I appreciate them to this day. We built relationships quickly, and the level of trust made it not only successful but a very enjoyable project. Every time I stop back, it feels like I never left.”

“I can honestly say it’s my favorite and most rewarding project I’ve worked on to date and probably will be in my career,” he said.

“It’s the power of the Cathedral: It develops strong and lasting relationships through all parties involved. With everything that went on and all the unique challenges, every team member felt privileged and excited to be part of it. There was a positive, can-do attitude around the project and never a moment when people didn’t think the vision could be accomplished.”

The Cathedral will celebrate its 100th anniversary all week with events daily open to all:

We believe that the relationships we build in the field are what truly makes us unique. Work with someone who values you.